The emancipatory potential of new technologies comes often at odds with their dominance by large corporations and the legislative control of the states. Surveillance and control are a real risk for privacy and the users’ right of anonymity, in particular, for all of those social activists that may suffer the repression by the powers they face. Despite these inherent risks, movements follow doing a disruptive use of the commercial technologies, but they also bet for the development of autonomous projects in technical innovation. Which are the risks and threats by the use of movements of technologies that have been made for oligopolistic companies? ¿What dangers have surveillance of the governments and large corporations for activism? Which will be the challenges of these initiatives for autonomous development of technological tools by social movements? Is it worth using outside disruptive technologies despite their risks? 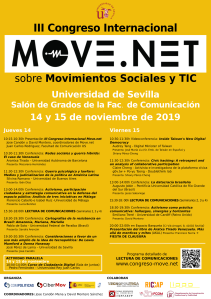